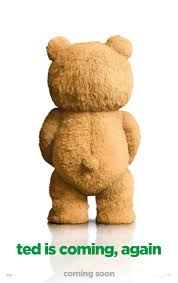 Sequels to comedy classics are inherently hard to pull off – the successful ones (’22 Jump Street’, ‘Toy Story 2’) both build on what has come before and take the conceit in a new direction, while the middling ones (‘The Hangover II’, ‘Men in Black II’) directly repeat the same formula, providing decent laughs and evaporating.  The truly awful ones (‘Caddyshack 2’, ‘Blues Brothers 2000’) basically crap all over what has come before and truly fight for laughs.  ‘Ted 2’ falls somewhere between the middling and crap, taking the good will created by the first uproarious and successful film and figuratively, if not literally, flushing it down the toilet.

While the original ‘Ted’ took a family film concept (toy bear comes alive for a lonely child) in borderline brilliant and very adult directions to represent the balance of the male ‘Id’ in order to truly mature and commit,  ‘Ted 2’ tries to apply the concept of the titular character’s attempt to prove personhood harkening to the civil rights struggle of various oppressed groups in American history.  Creator, writer, director, and voice star Seth MacFarlane’s attempt to show how ridiculous people can be for not recognizing someone as truly human would have resonated more with current struggles if it was handled with some degree of subtlety.  The blatant courtroom plot thread falls so flat in its’ unrealistic handling and the idea that Ted must prove himself worthy to care about (unbelievably, as uttered by Morgan Freeman in a cameo) actually contradicts the argument MacFarlane is trying to make.  Anyone fighting for civil rights should not need to prove that they matter in order to be recognized – the point is that these are inherent American and human rights.

All of this discussion may seem ridiculous for a movie loaded with ‘male appendage’ and pot jokes, but since the filmmaker chooses to focus his movie around these themes in order to move the plot along, it is impossible to not reflect on the proceedings.

Perhaps the worst offense is that even if one can put aside the preposterousness of the story, the movie is not really very funny.  Mild chuckling is the best way to describe audience reaction to the better zingers and gags, while most others elicit disgust, or worse yet, no reaction at all.  Mark Wahlberg, so energized as ‘thunder-buddy’ best friend John in the original, is relegated to moping over the loss of Mila Kunis (rightfully so), and playing second fiddle to his pal.  Part of what made the first ‘Ted’ so great was the easy familiarity between Wahlberg and his CG costar, selling the crazy conceit in the first place.  Amanda Seyfried plays Ted’s pro bono lawyer, Samantha L. Jackson (get it? . . . see, not really funny), and makes out decently in her role, seeming to relish playing around in this environment, but even the chemistry between she and John is weak.  ‘Ted 2’ trots out cameo after cameo, ranging from the obvious (Tom Brady), to the inspired (Jimmy Kimmel and ‘SNL’ riffing on Ted’s situation), to the bizarre (Liam Neeson), topped off by an overlong big opening, classic Hollywood musical dance number (?!), all of it amounting to a bloated, tedious mess.  Yuck . . . .