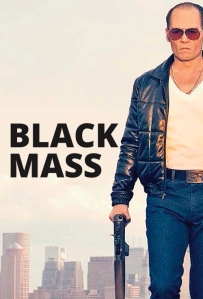 There is a great scene two-thirds into the new gritty, true-crime drama, ‘Black Mass,’ that perfectly displays both the strength and weakness of the overall picture.  Johnny Depp, chillingly portraying former kingpin of South Boston, James ‘Whitey’ Bulger, is in the home of his childhood friend and FBI enabler John Connelly (Joel Edgerton in another multi-dimensional performance).  During this visit he lulls and chides another agent as well as calmly menaces Connelly’s wife Marianne (Julianne Nicholson, one of many solid supporting actors sprinkled throughout the film).  The dinner table portion evokes the famous ‘Goodfellas’ night-club table scene with Joe Pesci, and the following section where he psychologically attacks the suspicious woman harkens back to the De Niro/Juliette Lewis scene in ‘Cape Fear.’  It’s no surprise that both of these films were directed by Martin Scorcese, king of the crime film, whose films have become a sub-genre of their own.  The director of ‘Black Mass’, Scott Cooper, is attempting his own version of this type of film, and while he assuredly gets solid performances by his cast, he is unable to create a truly original, indelible entry that can stand next to other similar, better films.