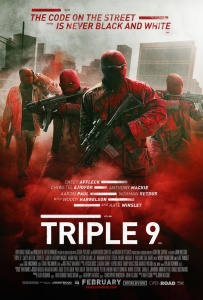 ‘Triple 9,’ the new film by once promising director, John Hillcoat (‘The Proposition’, ‘The Road’) is an overstuffed mess with a few glimmers of inspired filmmaking.  The movie wants to be a gritty, Atlanta-set crime epic, a la Michael Mann’s cops and robbers masterpiece, ‘Heat’, complete with a sprawling cast of solid to great actors playing criminals and police motivated by personal angles.  Instead, it winds up a meandering, over-acted jumble of ideas with uninteresting character motivations that fail to engage the audience.

The core team of ‘professional’ thieves introduced in an opening heist that is mildly engaging (yet pales in comparison to similar scenes in the aforementioned ‘Heat’ and ‘The Dark Knight’s’ riveting opener) is made up of former special forces and crooked cops.  The team is led by Chiwetel Ejiofor’s Mike (unconvincingly brash), with brothers Russell (a wasted Norman Reedus) and drug-addled Gabe (Aaron Paul – call this, When AMC’s The Walking Dead’s Daryl met AMC’s Breaking Bad’s Jesse) along for the ride.  Rounding out the nonsensical crew are two crooked cops, Marcus and Franco, played by Anthony Mackie (who can’t commit to an underwritten character) and Clifton Collins Jr. (all sneering, telegraphed corruption), whose motivation for breaking bad is never revealed or even really alluded to.  They are all inexplicably beholden to a terribly miscast Kate Winslet as stand-in Russian-Jewish mob boss, Irina – it appears that either she was directed poorly or simply let loose in a one-note role.

On the other side of this misbegotten coin are the police officers, mainly played by Casey Affleck as Chris, new partner to an annoyed Marcus, and Woody Harrelson as his Uncle Jeff, a boozy, drug-using, slob of a detective with a penchant for stars-and-stripes neckties.  Affleck fares better than most in this film and gets to run point in the central highlight, an extended raid scene shot at eye-level from the perspective of the police in formation as they knock down doors and clear rooms in pursuit of the subject.  It’s a scene that showcases the uncompromising danger faced by police in an urban setting where danger threatens around every corner, and it manages to inject some earned tension as well as finally give the characters some memorable moments, bonded in a shared, traumatic event.  Harrelson appears to have wandered onto the set from a different movie entirely, and the filmmakers just decided to roll with it, shooting him in unrestrained scenes that let him run rampant – it may be entertaining, but it is surely not quality.  The movie does a good job of capturing the underbelly of Atlanta, GA in an un-sanitized way – this movie may hurt the ATL’s tourism trade, that is if anyone really pays much attention to the film, which despite a stellar cast, wallows in mediocrity at best and evaporates soon after viewing . . .