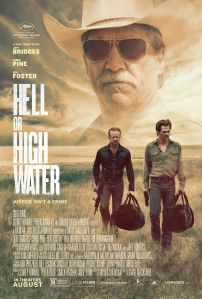 Sometimes a film comes out of nowhere and just absolutely kills it on every level; the recent wide release, after a well-regarded limited release, of neo-western / noir, ‘Hell or High Water,’ is one such example.  Written by television character actor turned screenwriter, Taylor Sheriden (‘Sicario’), directed by English-born David Mackenzie (‘Starred Up’), and starring Chris Pine, Ben Foster, and Jeff Bridges, the film is a wonder, a throwback to the character driven crime films of the 70s yet teeming with modern sensibilities.  As the plot naturally unfolds over the course of its’ runtime, introducing and developing fully dimensional main and side players, the film sneaks up and gut punches, leaving an audience dazed and awed over the experience.

Opening with a long, languid, wide, seamless, exterior tracking shot of a small any-town bank branch, a beat up Iroc-Z Camaro makes its’ way into the vicinity of the building, leading to an early morning encounter between an unsuspecting, but unfazed, Texas-tough clerk, and two ski mask and pistol brandishing thieves.  What at first appears to be a desperate act by desperate men turns into a much more complex bank heist plan set against a highway backdrop littered with various billboards of debt remedy that, like the rampant evangelism across the Bible Belt, promise deliverance.  Introduced on the scene are police and two Texas Rangers, one of which in particular has extra determination to catch his quarry as they pursue them across West Texas.

It’s best to leave the plot to unfold on its’ own as it is compelling while it reveals itself, but first and foremost this is a character piece whose actors wholly and effectively bring their roles to iconic life.  Chris Pine (Kirk in the new ‘Star Trek’ movies), almost unrecognizable in stringy hair and gruff facial hair, plays Toby, the younger half of the Howard brothers.  Gaunt and exasperated, Pine imbues him with a quiet intelligence and a deep malcontent with the cycle of poverty, in a performance that is a stark contrast to his blockbuster roles and stands as the best of his career.  Ben Foster (‘Lone Survivor’, ‘Ain’t Them Bodies Saints’) is older brother Tanner, who creates an instantly iconic, career-defining role that channels young DeNiro in ‘Mean Streets,’ as a strangely charismatic sociopathic small-time career criminal and miscreant, a man haunted by his choices yet staunchly loyal to a family one can tell he has always been at odds with.  The always enigmatic Jeff Bridges plays Texas Ranger Marcus Hamilton, on the verge of retirement.  He’s had experience playing this type of gruff, weary, but still driven character in the past (‘True Grit’), but not quite like this role – a relic from another, more black and white era where bad guys wore black and good guys wore white.

Perhaps the biggest character is West Texas itself, a vast expanse of plains and desert, with some craggy rock structures littered around like sharp edges of a hardened land.  The leathery weariness is etched in the faces of a populace fed up with a  financial system rigged to take advantage of their misfortune and misery.  The film riffs on issues unique to the Lone Star state, from the fact that Rangers can do just what their namesake implies, free to pursue across jurisdictions, encountering herds of cattle being steered away from dust bowls and storms, dealing with an armed open carry public, itching to take something back under control.  It even incorporates the unique American experience of tribal run casinos, the attempt of a haunted nation to atone for its’ past sins of transgression.  Classic films with a violent slant set in Texas (‘No Country For Old Men’) have always been able to captivate, telling simple tales of desperate plans motivated by complex issues and complicated history.  ‘Hell or High Water’ makes perfect use of its’ characters and setting to deliver a harrowing, funny, engaging, melancholic, entertaining, instantly classic film that begs to be seen as the summer winds down . . .