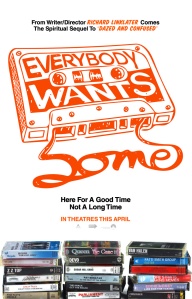 In 1993, Richard Linklater wrote and directed the seminal ’70s hang-out flick, ‘Dazed and Confused,’ an immensely entertaining movie about the last day of school in an unnamed Texas town that launched the acting careers of the likes of Ben Affleck, Matthew McConaughey, Milla Jovovich, Parker Posey, and many more.  He’s back at it with ‘Everybody Wants Some!!’, this time setting his immensely entertaining movie in 1980 over the course of the first weekend before classes start in an unnamed Texas college, and starring a group of relative unknowns that will likely go on to have solid acting careers.  The movie takes its’ title from the Van Halen hit of the same year, a song and band that ushered in the shallow rock that would dominate ’80s popular music, yet the song’s undeniable appeal to our baser natures and desires can also be applied to the characters’ activity in the film but also audience affection towards them.

‘Everybody Wants Some!!’ opens to the horny strains of eponymous ’80s song, ‘My Sharona’ (actually released in 1979), and the arrival of wide (and cartoonishly googly) -eyed college freshman Jake (Blake Jenner) to his new home, a dilapidated house occupied by half of his new baseball teammates.  The veterans (one of them being team captain McReynolds, played by a blunt and extremely competitive Tyler Hoechlin, the actor currently donning Superman’s tights on the CW’s ‘Supergirl’; another being the charismatic Finn, a surprisingly well-spoken life-of-the-party kind of guy, played by Glen Powell, who steals the movie just like he did on ‘Scream Queens’ as Chad Radwell) greet him in that young jock mode of playful disrespect, and one steels themselves thinking they are in for a ‘Porky’s’ style throwback romp of a movie.  As the film unfurls, yes, it is very much a college comedy with plenty of raunch, but Linklater has more up his sleeve.  Just when you think the archetypes on display can verge on the edge of offense, Linklater and his young acting crew are able to imbue an undercurrent of sweetness, a reminder that the brashness of youth always comes with a healthy side of wonder, camaraderie, and desire to connect.

Rather than just present a hodgepodge of nostalgia, Linklater organically weaves the various styles, trends, and especially, music genres, that were starting to segregate young people into different groups.  Since the movie takes place over four days and nights prior to the first day of classes, it portrays the team (mainly through interactions with Jake) in a variety of club and party settings, from the neon disco, to country line dancing (TX staple ‘Cotton-Eyed Joe (The Bullshit Song)), to a grungy punk show, and finally, an art student party.  Throughout these settings and within their new home, the characters compete with each other, mainly with how many girls they can get with, but also their ability to assimilate into these different worlds and with each other.  That these stimuli all work to create the basis of one’s pop-culture leanings and influence of personality is not lost on the characters and audience.  For the entire two hour runtime, it is hard not to smile, watching these guys rib each other and bond, get into trouble, but most of all, revel for a time in our lives when you could party hard all day and night, yet still manage to get up to do it all over again . . .