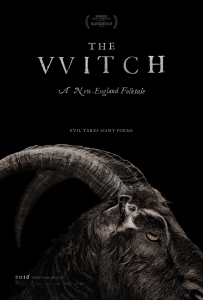 The idea of the New England witch is a ripe subject, studied intensely as a shameful part of the American past, immortalized in the oft-produced and taught play, ‘The Crucible,’ but one would be hard pressed to identify an artistic representation on screen fitting of the matter’s resonant themes of religious persecution, feminine repression, and incendiary hysteria . . . until now.  ‘The Witch’ arrived in theaters just over a year ago along with raving critical praise and film festival bona fides, yet failed to ignite the same kind of passion amongst theatergoers.  It’s possible that current horror fans have a particular notion of what they want in escapist thrills (PG-13 jump scares, creep-outs, or rated R gore) and Robert Eggers’, ‘The Witch,’ didn’t check off these marks conventionally, but it would be a shame to write off this film.  While the movie certainly contains its’ share of the aforementioned jumps and gore, Eggers is much more interested in building a foreboding sense of dread that permeates every frame, as well as maintaining a constant state of unease and setting up an understanding of how quickly and easily the puritan peoples could jump to such tragic misunderstandings about their fellow family members.

‘The Witch’ quickly establishes the unforgiving (both meta- and physical) climate the family at the center of the film is subjected to. Ostracized for spreading a gospel at odds with the rest of the walled-in village from which they have lived after immigrating from England (it is implied that patriarch, William, played with immense gravity by the tenor-voiced, Ralph Ineson, has been preaching even stricter tenets than the elders are accustomed to), they are forced to go out into the wild and make a life of farming and survival on their own.  They settle in a spot on the edge of the woods – a dense forest untouched by humanity, a setting ripe for the tales of the supernatural that reign in this part of the world, popularized to this day as evident by the ever-growing popularity of haunted hayrides and tours in the northeast.

Rather than skirting around the question of whether or not evil lurks in these harsh environs, Eggers quickly establishes that there is a predator out there, and it’s this evil force’s effect on the family that interests this first-time filmmaker.  The writer/director utilizes natural light, actual Olde English text and vernacular, and only the building materials used hundreds of years ago to forge the homestead, in order to recreate a truly legitimate setting for these fictional characters to operate in.  Whether it was this attention to uncompromising detail, the subject matter, the direction, or likely a combination of all, Eggers coaxes extremely believable performances out of his small cast, both young (Harvey Scrimshaw as eldest son Caleb is remarkable) and adult (Kate Dickie ups the drama from her memorable turn as Lysa Arryn on ‘Game of Thrones’).  Anchoring the film is Anya Taylor-Joy (an actress to watch) as teenage daughter Thomasin, a young woman entering adulthood with little outside stimuli, yet displaying a realistic yearning for something more out of life.  Like all classic horror stories, ‘The Witch’ plays with limited, yet well-defined setting, human drama touched by the supernatural realm, and a cast and crew dedicated to the illusion, resulting in the definitive horror story befitting of that unique figure, the American witch . . .