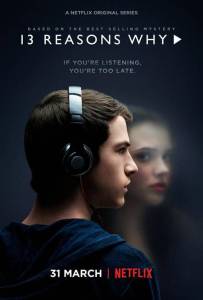 The conceit fueling Netflix’s latest binge-worthy original program, ’13 Reasons Why,’ is an extremely challenging one.  Its’ exploration of the events that led to a teenage girl’s suicide could be construed as exploitation of a very serious subject, but since the series’ structure is so compelling and its’ content so wrenching, it succeeds on multiple levels.  Through sharp writing, convincing acting, and inspired direction, ‘13’ is able to present mostly three-dimensional characters struggling with guilt, addiction, friendship, parenting, counseling, and desire for human connection within the singular setting of the suburban American high school.

The concept of the show is an instant mysterious hook.  Hannah Baker (impressive newcomer Katherine Langford) has tragically taken her own life without leaving a suicide note, leaving her peers, family, and faculty to question what could have led to this fateful decision.  Only a select few know her reasons, spelled out in her own words over a series of cassette tapes (a poetic nod to tactile permanence in an era of digital transience) passed from classmate to classmate.  The pilot presents Clay Jensen (child actor Dylan Minnette doing outstanding, nuanced work) as the latest recipient of the tapes, and it quickly establishes why this earnest yet flawed young man would act as audience surrogate.  No one is presented perfectly here, including the adults in Hannah’s life, many played by familiar faces, in conflicted, complicated performances.  Kate Walsh (‘Grey’s Anatomy’), in particular, devastatingly portrays Hannah’s mother with equal parts guilt and vengeance, yearning for answers and desperate for some kind of understanding.

At times, the pressure of maintaining the tape-per-episode structure stifles the organic unfolding of the plot and strains credibility, but overall it is an extremely effective way to keep the series interesting.  A handful of directors, including Tom McCarthy, the director of Best Picture winner, ‘Spotlight,’ set a unifying tone and structure for the episodes, making it easy to follow the narrative as it seamlessly melds the past and the present in compelling ways (note the color schemes delineating time and mood).  Just as Clay struggles with the subject matter but has to push on in seeking responsibility, so does the audience.  As the tapes progress, and the reasons mount, it becomes more and more difficult on Clay and the viewer, especially because the tragic ending looms.  There are also a few moments towards the end of the series that hint to the continuation of the story for another season, which could threaten to cheapen its’ impact and move it into melodrama.

One of the toughest aspects to reconcile is the entertainment factor of the series – spending time with these characters when they are acting like hopeful young people is a pleasant experience – there’s something intoxicating about young love, with all of its’ promise and possibility.  There’s also a flip side to youthful impetuousness and the unfortunate toxic manner in which it can infect, here on display in sometimes graphic detail.  ‘13 Reasons Why’ is not an easy series to watch, and it doesn’t aim to be – it never shies away from the many ways people can hurt, ignore, make bad choices, selfishly indulge or repress, and it showcases the real, tragic consequences of action and inaction . . .