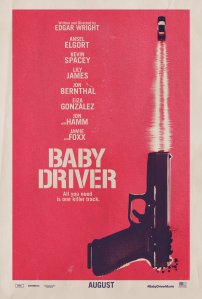 Writer/Director Edgar Wright’s sensibilities are on full display in his latest pop-comic-thriller-adrenaline ride of a film, ‘Baby Driver.’  This is his take on the heist movie; the one-last-job story so prevalent in gangster films, but here in a unique celebration of music and romance that is so packed with scene after scene of excitement, it explodes on screen.  The movie is a wonder of practical stunts and car chases, punctuated by an almost omnipresent soundtrack of tunes from all sorts of musical genres and timeframes.

To describe the plot of ‘Baby Driver’ is to describe almost every gangster/heist/noir film – central character wants out of sordid business to run away with the girl.  Baby (Ansel Elgort in a defining role of natural, kind of awkward cool) is a savant behind the wheel, indebted to local Atlanta gangster Doc (Kevin Spacey, eschewing a traditional heavy performance for a playfully sinister one) to be the getaway driver for his schemes.  These plans involve a revolving roster of dastardly guest stars like Jon Hamm (‘Mad Men’), Jaime Foxx, Eiza Gonzalez (‘From Dusk Till Dawn – The Series’), and even Red Hot Chili Peppers’ guitarist, Flea, who are confounded by the temperament of the titular character yet astounded by his vehicular skills.  That this ability is showcased in some of the most astonishing, and varied practical car chase scenes ever committed to film, all backed by pop songs of different eras is the icing on the cake.

The character of Baby is defined by the soundtrack radiating from his ever present iPod and earbuds.  He uses his playlists to not only drown out the tinnitus constantly plaguing him as a result of a childhood accident, but also to keep him grounded in his own sense of detached reality, symbolically protecting him from the bad influence of his “co-workers”.  This is a criminal at war with his conscience, beholden to these miscreants but still retaining a sense of morality.  It’s no surprise that he falls for a sweet, bubbly, and equally musically inclined diner waitress Debora, played by a wide-eyed Lily James (‘Cinderella’ herself).  Elgort plays him with a detached air that is also strangely in sync with his surroundings.  Wright brings this to life through an uncanny ability to match the tunes to the visuals – graffiti and signage link to the lyrics, gunshots meld to the beat, etc.  That the music he has selected (Danger Mouse sponsered the soundtrack and produced a track with Run the Jewels and Big Boi that’s featured in the movie) have served as samples to modern music provide a familiarity and classic feel to the film.

‘Baby Driver’ is at once familiar and something wholly new and original.  Juggling between scenes of pure innocent joy and undeniable tension, the movie could have come off as tonally disjointed, but somehow, like he has with much of his growing resume, starting with ‘Shaun of the Dead’, the first in his ‘Cornetto Trilogy’, to the frenetic ‘Scott Pilgrim’, Wright pulls it all off perfectly.  It’s a film of undeniable fun, an endorphin rush of pure cinema from an auteur who loves to stand genre trope on its’ head and spin it . . .