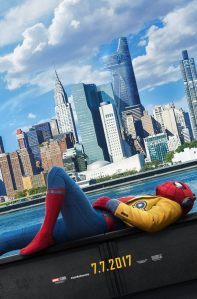 With the newest reboot of the lucrative ‘Spider-Man’ franchise, subtitled ‘Homecoming’, Sony finally wised up and let Peter Parker play in the Marvel Cinematic Universe’s sandbox.  After sadly mishandling the property with its’ ‘Amazing’ series, the studio lent its’ cash cow to Marvel in 2016’s ‘Captain America: Civil War’ to widely lauded results.  Fans embraced a teenage hero, enamored with meeting the established spandex-clad crew in the extended airport battle scene that he was conscripted into by Tony Stark.  Now played with wide-eyed comic wonder by a baby-faced Tom Holland, this iteration of the character illustrated the promise of a fun take that thankfully has followed him into his own stand-alone film.

There has been celebration of the fact that the filmmakers on ‘Homecoming’ opted to eschew the traditional re-telling of Spidey’s origin story, but the movie is another type of origin story, one that portrays the emergence of the character as a hero on his own terms.  The movie opens with a resonant sequence that ties this film’s antagonist to the overall Marvel U – Michael Keaton’s Adrian Toomes, a demolition/repo business owner has his contract to clean up NYC post-‘Avengers’ battle revoked unceremoniously years before the events of this film.  Then it cuts to a hilarious extended sequence that shows the events of ‘Civil War’ from Peter Parker’s perspective, all done with a hand-held camera and commentary as if Peter were self-documenting his crazy experience.  After being pulled into the conflict, the young wannabe hero is brushed aside to live a normal teenage life, yet Peter yearns to move onto bigger heroic endeavors, so he starts saving neighborhood lives, stopping the bad guys, etc.

In these early scenes, Peter’s world is set-up genuinely, from his doting Aunt May (welcome back Marisa Tomei!), to his best friend Ned (a breakout performance by Jacob Batalon), and fringe-friend Michelle (a wonderfully snarky Zendaya).  He is a teenage boy going through all the things a modern young person encounters, only he’s got this amazing secret and drive to use his powers, all bubbling under the surface of his desire for popularity, the girl of his dreams, and the respect he thinks he deserves.  Robert Downey Jr.’s Tony Stark, and even more prominently Jon Favreau’s Happy Hogan, Stark’s driver and confidant, turn up to absently mentor the fledgling super-hero.  It was Tony who built Peter the suit that enhances his spider-granted powers, and like any Pandora’s Box story, Peter can’t restrain himself from trying to utilize its’ full potential.

‘Spider-Man: Homecoming’ is packed with lightening quick wit, a grounded setting in Queens, NY (a side field trip scene in D.C. provides an exciting center-piece), and an energized cast.  Tom Holland perfectly captures the naïve courage so apparent in the earliest comic book renditions of the character.  He is matched well by a supporting cast that feels real and high school appropriate.  Director Jon Watts (‘Cop Car’), in his first big budget feature, keeps the action relatively small-scale and city-bound, with a real comedic flair (look for comedian cameos all over this thing).  The film is bound to the greater universe without feeling like an advertisement for the next big Marvel film, and the stakes are perfectly suited to the urban based hero (Keaton finishes the full meta cycle playing the Vulture, a villain with real initial pathos who loses his way).  This ‘Spider-Man’ knows that its’ main mission is to have fun with this character, create stakes to put Parker through the ringer, and set the stage for a hopefully long stint of watching him grow as a hero and a man . . .