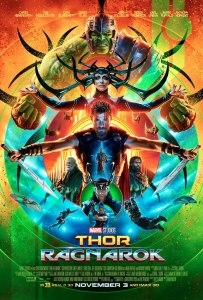 Is there and has there ever been an extended franchise/film universe more successful and exciting than the MCU?  Critics and audiences looking for more meaty, adult entertainment have been decrying the prevalence of superhero comic book films for the past few years (and yes, there have been problematic movies **ahem . . . DC, excluding ‘Wonder Woman’**), but as long as Marvel Studios (and parent company Disney) keep churning out hit after hit, fans have no reason to complain.  The latest entry is technically the third film in the Chris Hemsworth starring ‘Thor’ series, this outing subtitled ‘Ragnarok’, and is the MCU’s version of an adventure film romp that just might be the most unapologetically fun one yet.

Despite the apocalyptic title (Ragnarok is the prophesized end of all things Asgard, mythical home of the Norse gods), Marvel handed the reins over to New Zealander comic director Taiki Waititi, best known for his ‘Flight of the Conchords’ work.  While the MCU stamp is all over this production with its’ nods to events in ‘Avengers’ and cameos, the overall vision and style is uniquely lively, hysterical, and just plain fun.  ‘Guardians of the Galaxy’ may have made it safe to define the cosmic corner of the universe as colorful and playful, but ‘Ragnorak’ stakes its’ own synth-scored, Jack Kirby-designed (the comics legend who would’ve turned 100 this year might as well be credited for art design when you compare his work to what’s on screen) claim as an ode to the displaced adventurer film.

The movie strips the hero of his home, his defining weapon, and even his signature locks, then throws him into a foreign setting with a few familiar callbacks.  The charismatic Hemsworth is finally able to unleash his full comedic talents playing the character of Thor, likely due to Waititi’s fluid directing style.  The fast-moving script may have been penned by long time Marvel scribes Eric Pearson, Craig Kyle & Christopher Yost (this team in particular have a history actually writing comics), but it is apparent that Waititi encouraged his actors to go off script and improvise, resulting in a free-flowing familiarity for maximum audience pleasure.  Hemsworth is joined, but not over-shadowed, by a supporting cast including old frenemies Loki (Tom Hiddleston reprising his well-deserved most famous role) and a hilariously tantrum-prone Hulk (Mark Ruffalo in live and performance capture), as well as new characters like Tessa Thompson’s commanding Valkyrie, Jeff Goldblum’s grandiose Grandmaster, Waititi himself in a break-out performance voicing rock-man Korg, and the scenery chewing (in a good way) Cate Blanchett(?!!) as the villainous Hela.

‘Thor’, like all its’ Marvel brethren screams to be seen on the big screen with an audience in an era where drama seems to thrive on the small screen and streaming.  The movie lives and breathes through its’ colorful imagery, audience response to the obvious fun the performers are having, and compelling prog rock electronic soundtrack by Mark Mothersbaugh (a prolific and distinctive composer probably best known from his days with Devo).  It all adds up to a rollicking good time at the movies, if ultimately not the deepest, but ‘Thor: Ragnarok’ completely owns what it wants to be and totally delivers . . .