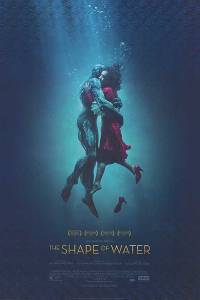 Guillermo del Toro is a passionate artist with a wonderful eye for the fantastic.  He is capable of creating both lauded works of art (‘Pan’s Labyrinth’), solid genre fare (‘Blade II’, ‘Hellboy’, ‘Pacific Rim’), and overwrought, although visually appealing, reaches (‘Crimson Peak’).  Despite the heaps of critical praise piled on his most recent film, ‘The Shape of Water,’ it falls squarely into that last category.  With its’ treacly plot, cartoonish supporting players, and incomprehensible, unconvincing ‘love story’, it may actually be his worst overall production.  The only saving graces to this messy and shockingly gory bore is the creative art direction and Sally’s Hawkins’ lead performance.

Del Toro wears his influences proudly on his sleeve.  ‘The Shape of Water,’ posits a monster movie, complete with its’ own ‘Creature From the Black Lagoon’, as a champion of the down-trodden and marginalized.  It is set in a hyper-realized 1960’s, and almost exclusively at night, reflecting the hours kept by its’ principal player, Sally Hawkins’ mute janitorial worker, Elisa.  Her daily (or more appropriately nightly) routine is set-up right from the start of the movie via a too-cutesy (and surprisingly self-pleasingly frank) montage that could have been lifted straight from a Jean-Pierre Jeunet joint like ‘Amelie’.  Her only friends are her advertiser artist, and sadly closeted, neighbor Giles (an engaging but ultimately grating Richard Jenkins) and her co-worker Zelda (an engaging but ultimately grating Octavia Spencer), who works alongside her cleaning all areas (even highly  restricted ones!) of a government facility.  These two care about Elisa, evidenced by the fact that they are the only people who bother to learn sign language so that they can communicate with her.  The same can’t be said for the one dimensional government goons and scientists harboring what amounts to be a not very secret secret.

The rest of the movie amounts to a not very complex plan to free the aforementioned secret, a missing link between man and fish, and the romantic relationship that blossoms between him and Elisa.  The greatest monster movies succeed because they are able to imbue an undeniable sympathy for the target, but ‘The Shape of Water’ attempts to take this to another level all together, and this is where it truly fails.  From Michael Shannon’s so over-the-top performance as the true ‘monster’ in the movie that it defies the very definition of outrageous, to the overly whimsical choices del Toro makes in depicting the escapades of the new couple, nothing works successfully.  As always, Doug Jones provides an incredible physical performance, but there is nothing in his lively interpretation that illustrates the creature having any more mental capacity or acumen than an intelligent dolphin or ape, lending an air of questionable judgment over the entire proceedings, ugh . . .