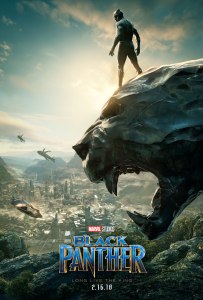 Up until this point, the films set in the Marvel Universe have told tales that interconnect in interesting ways and explore how they can affect each other, but what if a contained story were told of a secret world with the potential to upend everything?  ‘Black Panther’, the newest entry in the sprawling MCU saga, dares to do just that.  Under the guidance of Ryan Coogler, one of cinema’s most interesting young artists working today (‘Fruitvale Station’, ‘Creed’), it wildly succeeds on all levels; a thoroughly satisfying action/sci-fi epic with complex ideas about responsibility and heavy themes around the mantle of leadership.

There is so much going on in ‘Black Panther’ it’s hard to figure out where to start.  Ostensibly it’s a film about the newly crowned king of the fictional hidden African country of Wakanda, and the various challenges he faces.  Chadwick Boseman reprises his role of T’Challa, last seen in ‘Captain America: Civil War’ avenging the untimely death of his father T’Chaka, now ascending as heir to the throne in a truly glorious ritual among the cliffs and waterfalls of his homeland.  This land was blessed many years ago with the sole repository of Vibranium, a versatile element that is not only the hardest on the planet, but also serves as the foundation for the wondrous technology the Wakandans have cultivated, shielded from the prying eyes of the rest of the world that sees them as a third world country.  The film takes many twists and turns, at times a rumination on the sacred duties of its’ king and leader, an espionage thriller in the vein of James Bond, an action packed theme-park ride, and most interestingly, a challenging treatise on global colonialism / isolationism.

T’Challa may be the central figure in ‘Black Panther’, but he is surrounded by a most capable assembly of support characters and actors, both friend and foe.  He is flanked by Okoye, the general of the royal guard, the Dora Milage, and Nakia, a worldly spy who also happens to be his ex.  That these two are played radiantly by the commanding presences of Danai Gurira (‘Michonne’ on ‘The Walking Dead’) and Lupita Nyong’o (Oscar winner for ’12 Years a Slave’), illustrates the levels this film aspires to and achieves.  He’s also aided emotionally by his mother Ramonda (a regal Angela Bassett) and technically by his brilliant sister Shuri (Letitia Wright in a fun, scene-stealing performance).  One villain of this piece is played by Andy Serkis as Ulysses Klaue, the arms-dealing (sans one arm which has been replaced by a devastating sonic blaster), long-time Wakandan nemesis, who stole Vibranium from the country, and is one of the few outsiders who know of it’s true nature.  The other villain is Michael B. Jordan’s Erik Killmonger, a complicated character whose motivations in bringing Wakanda into the light, combined with the actor’s masterful performance, create one of the best counterpoints to a hero in any comic book movie yet.  That there are meaty side roles for Daniel Kaluuya (‘Get Out’), Martin Freeman (‘The Hobbit’ himself), Sterling K. Brown (‘This is Us’), and Forest Whitaker, just goes to show the dramatic heft and journey of this film.

‘Black Panther’s distinct characters, rich history, and unique setting, have kept the comic relevant since the mid-1960’s, but he has never reached the same levels of popularity of many other heroes.  Expect this to change right now.  Renowned cultural, social, and political author Ta-Nehisi Coates, journalist for The Atlantic and acclaimed writer of ‘Between the World and Me’, took over writing the comic book a few years ago, making Wakanda itself a main character, injecting it with royal intrigue and introducing the question of what truly makes a leader.  Kendrick Lamar, hip-hop’s greatest poet, curated an incredible album of music featured in and inspired by the film (gangsta rap in a Disney film must be a first).  Now writer/director Ryan Coogler takes the character to another level, crafting a powerful genre film that celebrates the beauty of Africa in a visual feast, and confronts the challenges of race expectations around the world within the framework of a big budget blockbuster that is also thought-provoking, rousing entertainment . . .