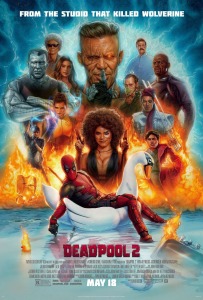 Unfortunately, the answer to this question is a muted ‘no’. . .  In February of 2016, the first ‘Deadpool’ movie was released and turned the superhero franchise game on its head.  Shepherded over multiple years, in fits and starts, by star Ryan Reynolds and screenwriters Rhett Reese and Paul Wernick, the film was a hard ‘R’-rated breath of fresh air for a genre that was ripe for a send up.  ‘Deadpool’ worked because it simultaneously jabbed and effectively realized the tropes of the comic book origin story.  With a relatively low budget, high energy approach, the movie was a massive success, one that would inevitably result in a sequel.

Almost everything about ‘Deadpool 2’, including its uninspiring name, seems to be less despite being more (more budget, more characters, more jokes, more run time, but less that actually lands).  For a franchise that came out of the gate lean, mean, and full of momentum, the first half of ‘DP2’ is a bit of a slog.  The jokes are funny and meta on paper (a jibe at ‘Logan’, an apt, but far from guffaw-inducing dissertation on the similarities between ‘Yentyl’s ‘Papa Can You Hear Me’ and ‘Frozen’s ‘Do You Want to Build a Snowman’), and the action violence is ramped up to 11, but nothing really hits until the introduction of ‘X-Force’ later in the film.

Prior to the assemblage of Deadpool’s own set of ‘X-Men’ – the ‘Men’ is dropped to be more gender inclusive – the audience is also introduced to Josh Brolin’s Cable, the deadly (and deadly serious) time-hopping soldier from the future, on a mission to assassinate a villain (an annoying Julian Dennison) as a teenager, before he becomes a killer.  In a strange turn, Brolin double-dips this summer as a mo-cap Thanos in the MCU proper, and a gruff, but ultimately empty, turn here in Fox’s Marvel X-Men universe.  The dichotomy of Cable’s singular drive vs DP’s irreverent, unfocused motivation makes for some fun exchanges, but overall Cable is a difficult character to bring to the big screen.  His comic book origins are so convoluted it’s impossible to summarize here in a review, so his presentation in the movie is reduced to a one-note, Terminator-like, revenge-fueled approach that only sort of works because Brolin is an accomplished actor that can convey a lot via physicality.

Once Deadpool realizes that he needs the support of others to aid him in his quest to protect the boy that he has inexplicably formed a bond with, the movie starts to cook.  There is a great interview sequence where Reynolds’ Wade Wilson and T.J.Miller’s Weasel run through a number of quirky mutant characters both familiar to comic fans (Shatterstar) and unfamiliar, but hilarious (the Vanisher, literally invisible; Rob Delany’s Peter, a normal guy that just saw the ad).  It is here that Zazie Beetz (of ‘Atlanta’ fame) is introduced as Domino, a wise-cracking bad-ass with what Wade calls an un-cinematic mutant power of good luck.  That this power becomes the most cinematic of all once the action starts (in jaw-dropping, and truly laugh-out-loud funny sequences where everything unnaturally goes her way as opposed to every other member of X-Force), is both ironic and expected, giving Beetz some fun lines and scenes that save the movie from being a complete, overwrought disaster.

After perfectly establishing the character in the first surprise movie, Reynolds and the filmmakers (director Tim Miller is replaced here by one half of the ‘John Wick’ team, David Leitch (‘Atomic Blonde’)), drop the ball in an attempt to give the titular anti-hero emotional heft.  It’s evident once DP2 has run its course, that the strength of the film is in the riffing and playfulness of the characters, not the attempts to ground the character and world build.  The Fox ‘X-Men’ franchise is confusing enough, which has been a source of fodder for ‘Deadpool’ to play with, but by trying to be earnest at times in this sequel, and introducing a time travel element, it feels like a once promising property may have boxed and retconned itself into oblivion.  While there is plenty of fun to be had in the second half of ‘Deadpool 2’, it ultimately fails to capitalize on the good will of its predecessor to just let its freak flag fly, unencumbered by what a super-hero blockbuster needs to be in this IP-driven age of cinema . . .

2 thoughts on “‘Deadpool 2’ – Can Lightning Strike Twice for Ryan Reynolds?”