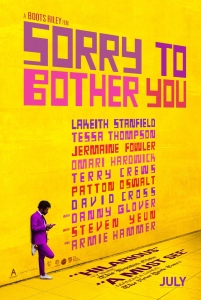 Capitalism.  Greed.  Race.  Art.  Gender.  Friendship.  Unionization.  Socialism.  Social Media.  Viral Fame.  Ethics.  Boots Riley’s ambitious satire, “Sorry To Bother You,’ isn’t afraid to tackle it all.  The film is an absurdist take on the trappings of wealth and power in America, the promise of which can be a cancer, counter to the moral drive for human connection and honest interaction.  The irony of representing this idea thematically in a multiplex is not lost on a paying audience.  Thankfully for all involved, this dose of pure acid is wholly entertaining as well.

The movie features rising star Lakeith Stanfield (‘Atlanta’, ‘Get Out’) as Cassius ‘Cash’ Green, an average young man trying to make his way in the world, who discovers an inner talent that causes him to rise from the droning, cubicle-laden office environment to the upper echelon of the corporate telemarketing world.  When the movie opens, Cash is living with his artist girlfriend Detroit (an exuberant Tessa Thompson deftly showing her range this year, after jumping from ‘Thor: Ragnorak’ to ‘Annihilation’ to ‘Westworld’) in a barely converted garage he rents from his uncle (Terry Crews).  He attempts to con his way into getting a low-level position as a telemarketer, using props like a fake trophy and ’employee of the month’ plaque, but he secures the job when the interviewer admires his ingenuity despite being called out on his ruse.  It’s quickly established that the world presented on screen is a heightened reality, possibly influenced by the fact that most of the characters are typically under the influence.  What starts off as a kind of stoner ‘Office Space’ comedy, eventually becomes something much more insidious and challenging.

The workaday office drone satire morphs into a deeper meditation on multiple topics and levels once Cash starts to gain even just a modicum of success that’s at odds with the grievances of his co-workers / friends.  ‘Sorry’ is filled with sight gags both hilarious and biting, from the ridiculously packed ‘VIP room’ at the club Cash and company frequent, to the dilapidated patchwork car he drives them around in, despite the fact that both he and his girlfriend have jobs which should allow them to afford something more stable.  Once he meets Danny Glover’s learned salesman, the film takes a wild turn, as Cash realizes that he can project a nasally bro-like ‘white voice’ that nonsensically results in a string of successful encyclopedia (?!) sales (another oft kilter detail in the age of the internet).  The film posits that even the disembodied voice of a clearly white man (David Cross provides it, with Patton Oswalt exclusively supplying the voice of an ascendant co-worker played by Omari Hardwick) has a better chance to make it in American society.  The metaphor may be an obvious one, but it is both effective and extremely funny in this context.  Riley chooses to film the cold call scenes by dropping Cash bodily into the various living rooms, kitchens, and offices of his marks, a jarring and original presentation that keeps the movie fluid.  It’s a testament to the filmmaking that a story set primarily in a few different enclosed spaces can come across as vibrant and alive as it does.  By the time a wild and wide-eyed Armie Hammer is introduced as unhinged billionaire Steve Lift, the audience is completely disoriented and at the mercy of a filmmaker clearly on a mission to mess with the mind of the collective.

Perhaps one of the most astounding aspects of ‘Sorry To Bother You’ is what a complete vision it is, coming from first-time feature writer/director Boots Riley.  Riley is an artist in his late 40s who has historically been primarily associated with independent hip-hop, although his anticapitalist work has always had a visual element.  While it may seem that these new and diverse voices are coming out of nowhere, the reality is that studios likely worried about taking chances on unproven talent coming from different arenas in the past.  Thankfully critical and commercial success have proved the old rules wrong as there is plenty of room in the multi-plex for material like this, a timely, cogent criticism of unchecked capitalism that’s in stark contrast to what it even means to be a human being . . .