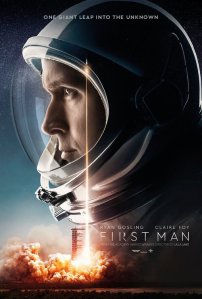 Watching ‘First Man’ on an IMAX screen, director Damien Chazelle and Ryan Gosling’s follow-up to ‘La La Land’, it’s striking that such a bombastic event as the first steps on the moon could be presented in such a subdued, melancholic, yet visceral way.  Yet it completely makes sense to make this film now, at a time when it can take full advantage of the big screen and immersive technology of modern theaters (IMAX is best).  From it’s raucous opening to its harrowing, then perfectly serene moon landing, ‘First Man’ creates a unique experience for the viewer.  The audience is placed directly inside these cramped spaces with pilot, astronaut, and perhaps more importantly, engineer, Neil Armstrong, a reserved figure of personal will and American triumph.

The film wastes no time announcing what kind of movie it is.  Its opening scene is a test run of an experimental jet, piloted by Gosling’s steely Armstrong, as it scrapes the edge of the Earth’s atmosphere.  It’s an extremely tense presentation of sight and sound, shot from the perspective of the tight quarters of the cockpit, a tactile cacophony of gages and switches that bob and light up red.  The viewer may not understand the jargon between pilot and ground crew, but the sentiment is clear, that the plane is about to break free of the relatively safe cushion of the sky into the vast, untethered space off-planet.  The scene is a truly incredibly staged practical production and a harbinger for the set pieces within the space-faring vehicles to come.

‘First Man’ is not really interested in hitting the beats accustomed to typical biopics, opting instead to focus on key events in the space race that Neil Armstrong was specifically attached to, all under the specter of a deeply personal trauma.  It’s obvious that the man was never a bombastic personality, but after the death of his cancer-stricken young daughter, Gosling’s Armstrong retreats even further into himself and his work, much to the chagrin of his beleaguered wife Janet (a strong, grounded performance by Claire Foy that pops off the screen).  His work is preparing his body and mind to handle the rigors of space travel, as well as make the precise calculations under pressure that are needed in moments of crisis.  It’s all very heady stuff that takes the glorification out of these momentous events, yet feel very relevant and real.  The issue is that without the sequences alluded to above, the movie is at times a ponderous experience, fraught with tragedy, and not exactly a rousing, escapist night at the movies.

Chazelle is an artist with an aim for precision and a sensibility rooted in Americana.  His previous two outstanding films, ‘Whiplash’ and ‘La La Land’ centered on characters driven by that same measured calculus, so it is not surprising that he has chosen Neil Armstrong (and Gosling playing him in detached ‘Drive’/’Blade Runner’ mode for that matter) as his next subject.  ‘First Man’ may not contain the emotional charge nor the whimsy of those two movies respectively, but it does provide a unique exploration of a seismic technological and cultural occurrence filtered through the lens of sadness and sacrifice.  It all pays off in a surprising way, in scenes of awe and monotony as Armstrong and crew succeed in the end.  Trying to imagine what it must have been like for these brave souls to basically ride a tin can bullet held together with nuts and bolts, land on a completely unknown surface, and then actually make it back safely is a difficult thing to do, but ‘First Man’s valiant, clinical attempt to present it should be recognized and applauded . . .