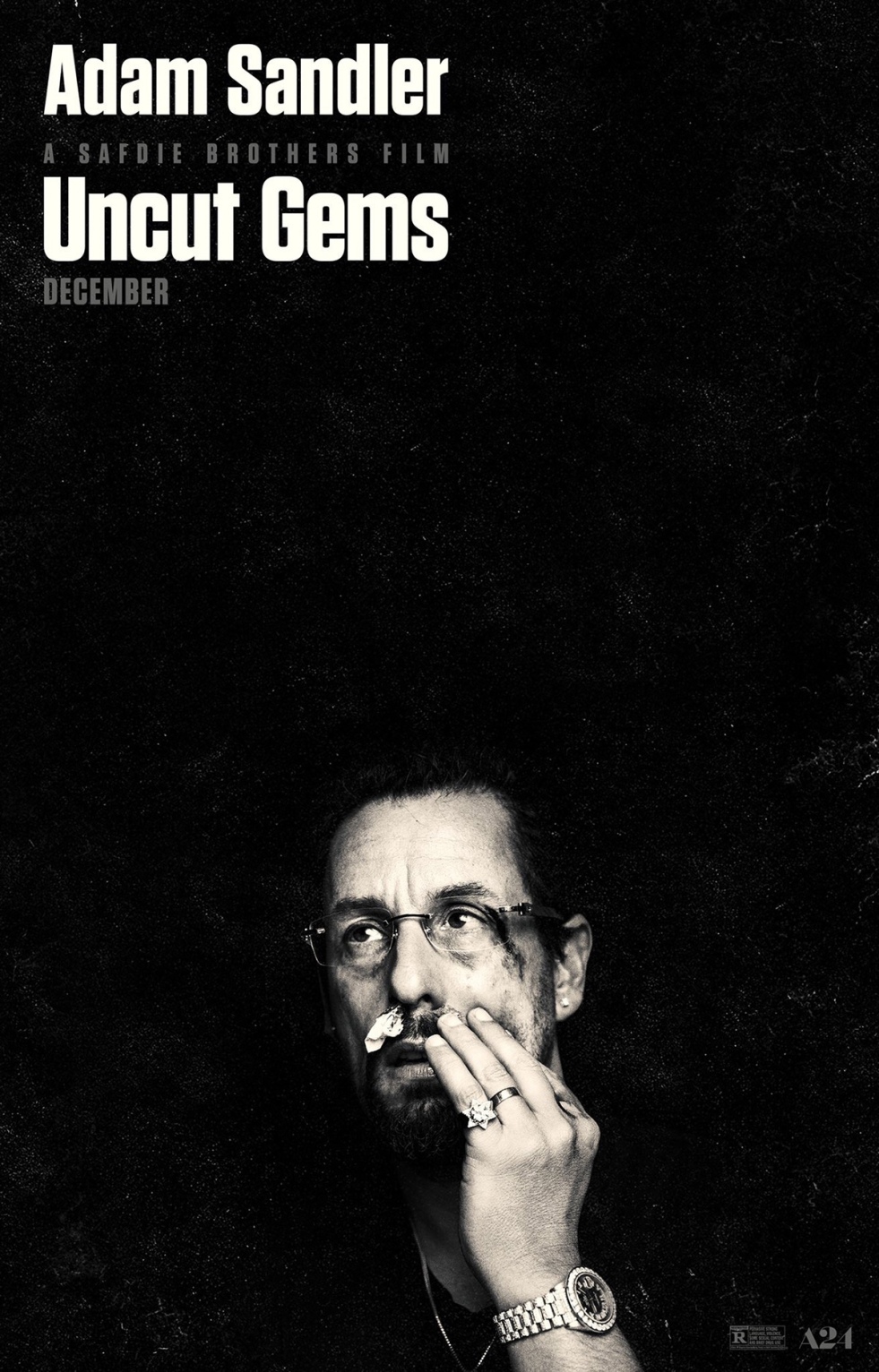 Love him or hate him, there is no denying Adam Sandler is a unique comedic talent and unbridled force of nature. When filmmakers, like The Safdie Brothers have done with ‘Uncut Gems’, effectively tap into that raw nerve of manic energy, the end result is nothing short of a cinematic miracle. Josh and Benny Safdie, along with collaborator Ronald Bronstein, have crafted an NYC-based showcase for their star, supported by a pool of talented actors and non-professional players from the world of sports, music, and local flavor. They wind up with a two hours plus panic-inducing thrill ride of a movie, instantly one of the best of the year.

Sandler plays Howard Ratner, a jewelry purveyor in Mid-Town Manhattan’s Diamond District, known as THE hub for the procurement of all kinds of bling. The world-famous area is marked by its Jewish cultural stamp and as a destination for those seeking high quality gems at wholesale prices. These tightly crammed showrooms attract customers looking for that magic engagement stone as well as garish speciality items alike, so it’s unsurprising to see mega famous celebrities smushing their entourages into the secure, buzz-in vestibules that serve as the only entry and exit for the highly coveted real estate. The movie really kicks off with the arrival of one such star in the spring of 2012 – Kevin Garnett, famous forward for the ’08 NBA World Champion Boston Celtics. Howard can’t resist sharing his newest get, an uncut black opal stolen from Ethiopian mines at the start of the film, and thus sets the crazed events of this narrative in motion.

Howard sees potential opportunity in every interaction he participates in, whether business, social, or personal. Ethics are not a question nor even a hesitation in his mind. While it appears that he is successful from his designer apparel (albeit in a disheveled way), well-manicured modern home in Long Island, and the behavior of his family, it is immediately obvious that he is a hustler of the highest degree, living moment to moment. Sandler is a natural for this cadence and it’s quite impossible to imagine anyone else in this role. As much as an audience despises a character like this, his allure is also strangely understandable, if wholly misguided. This is played out in the demeanor of all those around him, whether it’s his estranged wife (an exasperated Idina Menzel), ‘business partners’ Demany (a consistently exciting performance by Lakeith Stanfield), Arno (a live wire Eric Bogosian, no stranger to amoral NYC set narratives – see his recent guest stints on ‘Billions’ and ‘Sucession’), and girlfriend Julia (newcomer to watch Julia Fox), who embodies the adage that one should avoid mixing business and romance. Even an extended two scene cameo by NYC sports radio legend Mike Francesa as his restauranteur/bookie, a club sequence with The Weeknd just before he broke out, and features from other various denizens of the jewelry scene, show how Howie is perceived as both an annoyance and an occasional high roller.

While the casting is amazingly legit, and the setting is uniquely New York, ‘Uncut Gems’ is fully ensconced in the frenetic, DIY style of its creators, Josh and Benny Safdie, with their associates in tow. Never has their canvas been this big, nor star on the level of Adam Sandler (although Robert Pattinson throughly submitted to their gritty, high-wire aesthetic in ‘Good Time’), but they effectively wrangle everyone and everything about the movie into their vision. Nothing can match the talented writers/directors’ ability to craft the unrelenting tension of trying to follow Howard physically, mentally, and emotionally. As he doubles, triples, and quadruples down on his plays to get the big score he feels he deserves, the act of absorbing the events on screen is akin to chasing mercury. The visual and audible telling (including scenes of multiple people talking over each other in a marvel of sound editing), is matched beat for beat by an intrinsic, somehow both new agey and metronomic score by Daniel Lopatin, aka Oneohtrix Point Never. A movie the Safdies and co. were born to deliver, ‘Uncut Gems’ is an unmatched thrill ride inside the mind of a gambler who pushes the limits of chance in every aspect of his crazed existence. Just like the opal of the title, it’s a film so relentless in its brilliance, it might just make heads explode . . .