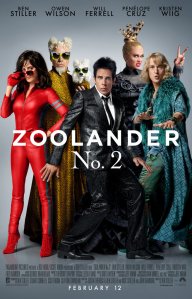 Ben Stiller may just be the most inconsistent comedic actor / filmmaker working today.  He is capable of creating or being a part of some of the funniest, spot-on satires and comedies(‘Tropic Thunder’, ‘The Cable Guy’, ‘There’s Something About Mary’), but for every one of these, his resume is balanced by the worst kind of Hollywood drek.  It’s hard to understand the existence of something like ‘Zoolander 2’ beyond displaying Stiller’s ability to gather as many of his celebrity friends in one place.

‘Z2’ must set a Guinness record for the most cameos in a movie.  Some are extended walk-ons of stars in garish costumes/prosthetics, while some are blink-and-miss quick shots of celebrities both from the entertainment and fashion worlds.  The ones that work supply the few honestly earned laughs in the film, from Kristen Wiig’s unrecognizable turn as the accent-challenged queen of the designing world, Alexanya Atoz, to Benedict Cumberbatch as the crazily androgynous, ambi/uber-sexual model, ‘All.’  Most, however, fall completely flat, including the highly marketed turn of targeted pop star Justin Bieber, who gets murdered after an absurdly special effects-heavy opening chase sequence that sets up the ‘plot’ of this farce.

It seems that someone is eliminating all the beautiful people in the pop culture world, and the Fashion Interpol (yes . . . ), led by former swimsuit model turned special agent Penelope Cruz (serving the straight female lead role as amiably as she can), must pull Derek Zoolander (Stiller) and Hansel (Owen Wilson) out of self-imposed exile to solve the mystery.  The two frenemies are estranged due to an unfortunate incident immediately following the first film where Derek’s ‘Center For Kids Who Don’t Read Good’ collapsed into the East River, killing his wife, disfiguring Hansel, and worst of all for him, ruining his career.  While the movie unfurls the sad saga of the events of Derek’s life since the apparent happy ending of the first film fifteen years ago, the audience starts questioning why it should revisit or really care about this one-trick character at all.

The original ‘Zoolander’ was not a big hit when it was released in 2001, but has gained traction and cult-status in the intervening years.  Upon revisiting the movie, it is a moderately entertaining, flamboyant satire of the fashion industry and unearned celebrity, that helped to launch Will Ferrell into the comedy stratosphere.  His over-the-top turn as the evil Mugato created an indelible character, and his inevitable return in this sequel is welcome, but not enough to save this scatological mess . . .