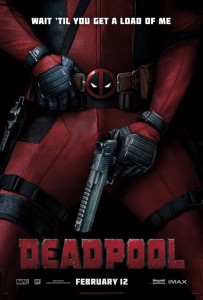 It’s truly hard to believe that this irreverent, profane comic book adaptation exists in reality, and even harder to believe that this hard-R version of the ‘Deadpool’ character works so well as a hilarious send-up of superhero origin stories.  Make no mistake, though, this is no spoof of a genre that can now basically print its’ own money.  Ryan Reynolds’ ‘Deadpool’ film is a constantly entertaining, throat-grabbing, crotch-smashing origin story in its’ own right, that starts as all snark and bombast but somehow morphs into a more convincingly emotional story than it has any right to be.

While credit must be given to first time director Tim Miller (his previous credits are for animation and video game effects) and ‘Zombieland’ screenwriters Rhett Reese and Paul Wernick for inspired non-linear storytelling, slow-motion action carnage and a pummeling, rapid-fire joke-filled script, it is Ryan Reynolds playing the titular character, aka Wade Wilson, who lobbied for years and ushered in this singular, 4th-wall breaking, horn-dog Merc with a Mouth onto the big screen.  The character has long been a fan favorite in his comic book incarnation due to his sleek red and black suit, propensity for two-fisted pistols, katana blades, and for driving the rest of the Marvel Universe nuts with his incessant chatter and disregard for all that is sacred.  Deadpool has never been a hero nor a villain, but he’s also never really elicited much pathos on the page.

In this instant classic movie rendition of the character, Reynolds and crew actually translate all that makes him popular, plus inject an element of sympathy in his horrific situation as a disfigured heathen who was duped into getting his powers in order to cure his cancer, thus allowing him to carry on his torrid relationship with soul-mate Vanessa (a very game Morena Baccarin, matching our hero’s quick, scatological wit).

As far as where this film fits into the Marvel Universe, this Fox production sits in the X-Men camp, which currently is not part of the Marvel cinematic universe buoyed by The Avengers’ characters, who are soon to be joined by Sony’s Spider-Man.  The fact that ‘X-Men: Days of Future Past’ pretty much erased previous X-Men movie mythology, including the original, mishandled introduction of the character, with Reynolds playing a neutered version of Deadpool in ‘X-Men Origins: Wolverine’, it allows for this film to sit securely as the only X-Men film in current continuity that is in the present time.  All of this craziness is actually referenced in this ‘Deadpool’ movie, as the character and filmmakers regularly bring it up, including poking fun at actors Hugh Jackman and Reynolds himself.  Two X-Men are on hand to try to lure Wade out of his life of disregard – Negasonic Teenage Warhead (Brianna Hildebrand, appropriately sullen with an awesome and unique power) and a fully CGI Colossus.  He’s also surrounded by familiar faces from the comic, best friend Weasel (T.J. Miller) and his elderly roommate, Blind Al (a hysterical, IKEA crafting, Leslie Uggams).

If the story beats are a bit familiar, albeit told with imagination and energy, and the villains somewhat rote (this may actually be intentional based on the clever opening credits), the movie more than makes up for it with its’ sheer audacity – there’s nothing else like ‘Deadpool’ in the comic-book movie world, an as-nasty-as-you-want-him-to-be anti-hero for our times . . . Shoop-shoop-a-doop indeed . . .

Rated:  R – seriously DO NOT bring children to this movie – he may look sorta like Spider-Man, but Deadpool IS NOT Spider-Man – I mean look at that poster!!!!